Every year 35,000 people die in car accidents in the United States.

This a huge figure, but it is almost three times less than the annual number of deaths from air pollution — 91–105 000 people.

The contribution of car emissions to the number of deaths due to dirty air in some cities exceeds 50% (for example, in Barcelona — 53%).

Although rising fuel prices lead to inflation, at the same time it motivates companies to optimize logistics, which means reducing emissions and improving our health. This happened to one of our clients as well.

Rising fuel prices and demands to reduce CO2 emissions have motivated them to turn to the automation of some processes using AI.

As a result of the implementation of our AI-based assistance system for logistics planning, not only emissions and fuel consumption were reduced, but overall savings were 30%, and delivery times were reduced.

Our client delivered and picked up hundreds of parcels every day. The number of couriers varied slightly, and there was also no regular address base for parcels.

Planning was done manually, assigning couriers to each district to deliver and pick up parcels. Delivery was planned the day before, and the pickup was dynamic.

This led to the fact that in some areas there was an urge for additional couriers, which was not convenient for operators and led to such situations. 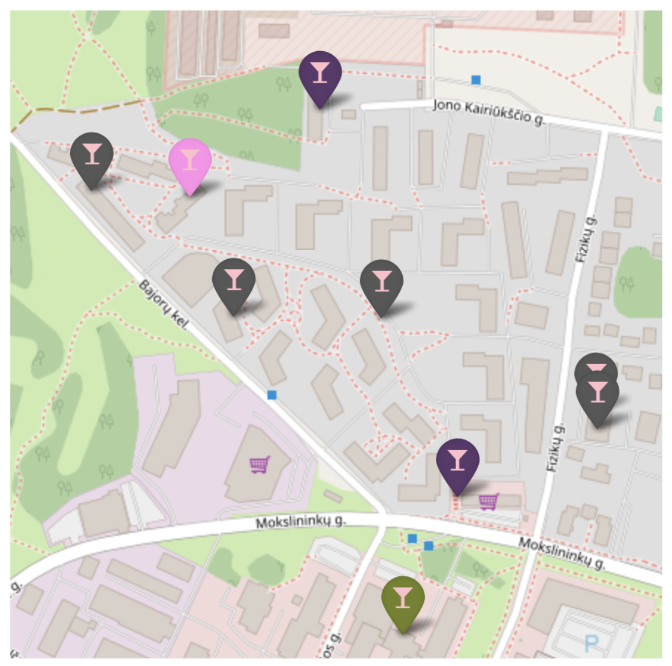 4 different couriers arrived in one area in one day. One color represents one courier.

Sometimes this led to completely absurd situations when 9 (!) different couriers arrived at the same building during the day.

And in other areas of the city, couriers finished their routes in just a couple of hours by visiting only 2–3 places.

Since the warehouse is located on the outskirts of the city, this leads to a large amount of fuel consumption.

In addition, logistics within the route were carried out according to the experience of the driver without taking into account traffic jams and routes, which also led to wasting time and fuel.

The problem was solved in 2 stages. During the first stage, we optimized the routes of couriers without changing the areas the couriers were assigned to. The result can be seen in the following picture.

The left part shows courier routes before optimization; on the right, after the implementation of optimization.

As you can see AI-optimized routes are more concise and overlap less. The total length of routes (which means delivery time and fuel consumption) decreased by 10–15%.

The same analysis showed a large unevenness in the load on couriers and the urgent need for dynamic redistribution of couriers across regions, depending on the current workload.

This was done during the second stage.

The routes were compiled based on the current number of couriers and the current distribution of addresses. And new pickup addresses were dynamically assigned to the closest courier to reduce extra travel.

The result exceeded our expectations. After the introduction of this model, the total path was reduced on average from 2200 km to 900 km, more than twice! And the total number of required cars decreased almost 3 times (!) with no overwork hours, the average working day lasts less than 7 hours. 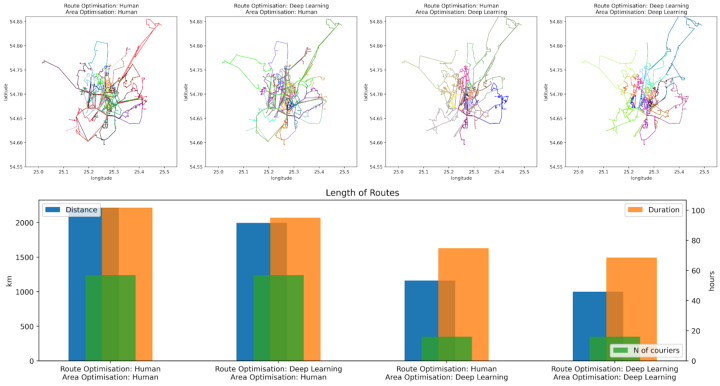 At present, we proceed with merging parcel locker data, which will further save fuel and increase the speed of delivery.

If you want to optimize your logistics, contact us for a demo and you’ll see that fewer emissions mean both cleaner air and profit.