Due to the consequences of the covid, energy and hot war unleashed by the criminal Putin regime, the rise in prices in our country is a record one since the 90s of the twentieth century. And there is no easy way out of this situation. We face serious challenges: we must simultaneously increase military spending to protect borders, change broken supply chains, strengthen cyber security, help Ukrainians fight Russian aggression, and cope with high energy prices.

It seems that the tasks are unsolvable, but this is not entirely true.

Many of these questions have been answered in the Green and Digital Deal EU. In addition, the solution of these tasks fits into the achievement of the Sustainable Development Goals adopted in 2015 by the United Nations. And the European Community has been thinking about these issues for more than 6 years.

Among the answers are energy reform with a transition to renewable energy and a shift in emphasis to the domestic production of critical products such as semiconductors, microchips and batteries. One of the main ways to solve the problems facing us is digital transformation.

Digitalization has already helped all of us during covid. Online meetings and education didn’t completely replace face-to-face communication but saved precious time and allowed us to continue work and study processes

Nowadays Starlink from Elon Musk and smart Turkish and US drones (digital products too) help the Ukrainian army to fight with a much more outnumbered enemy.

It also can help with inflation and economic slowdown.

Here lies the danger - companies that digitalize their processes earlier and more deeply get more results. That is, the big ones become even bigger and stronger. The same happens between countries. According to European Investment Bank report Lithuania significantly lags behind the EU average value of digitalization of production and construction processes. In the infrastructure sector, the EU average uses more different technologies.

If no decisions are made, then the gap from the leaders will increase. That means we need to act fast. And for example Estonia shows that small countries can take leadership in some digital areas.

The good news is that there is no need for a high initial investment to start digitalisation. Most of the solutions work on a subscription model and can be scaled relatively quickly and easily. That is, investments return rather fast.

The second good news is that in recent years, many digital tools, including artificial intelligence solutions, have reached a very high level. Many modules are available out of the box, the degree of automation of image processing and natural language solutions has reached a level unimaginable before.

That is only the political will of decision makers is needed to solve the problems of inflation, security and increase productivity.

AI increases productivity even more than digitalization. And here For now according to EuroStat only 4% of companies use at least one AI tool in Lithuania. Twice less than average in the EU. And 6 times less than the leader - Denmark. 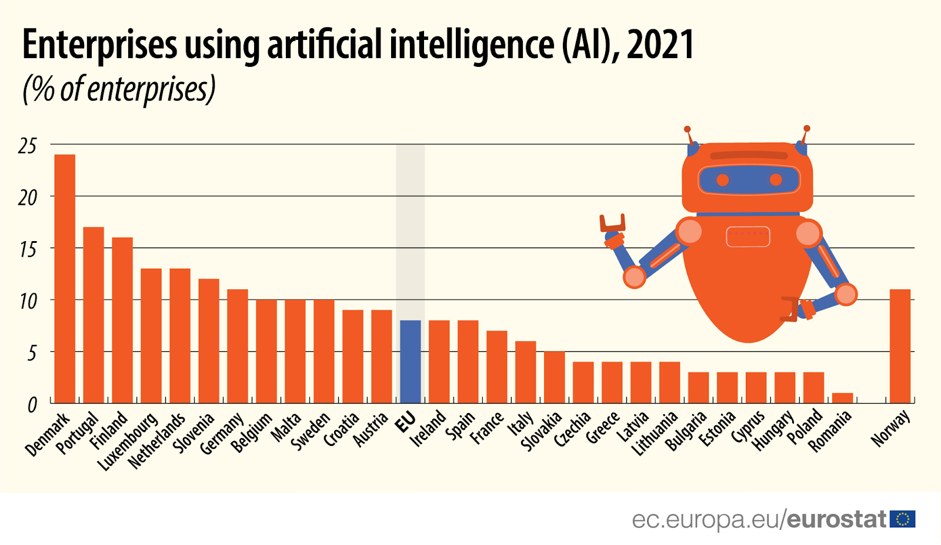 More detailedly, we described it in one of our previous articles.