The problem of efficient logistics is an important task of optimizing the work of many organizations. Modern data science and machine learning methods are making it possible to solve these issues faster than ever before.

In our work, we often solved similar problems: we made up the best routes for couriers, determined the optimal duty points for emergency services and the location of fast food outlets with high traffic.

The analysis of transport issues is a computationally intensive process, which, in addition, is difficult to visualize with traditional line and other diagrams, hence the rare publications on the topic. We decided to fill this gap in the infographic media space. In addition, in recent months, many have decided to invest in real estate, maybe our work will help someone with a choice.

The transport situation in Vilnius is not as difficult as in many large cities in Europe and the world, especially for motorists. But getting to the city center from the outskirts by public transport can be a daunting task.

53,023 buildings in Vilnius were taken to participate in the survey. Each building has a route by car and public transport during the morning rush hour to the Cathedral Square. Maps are rendered in high detail down to every house and are clickable. To simplify orientation, a layer of water bodies is superimposed: 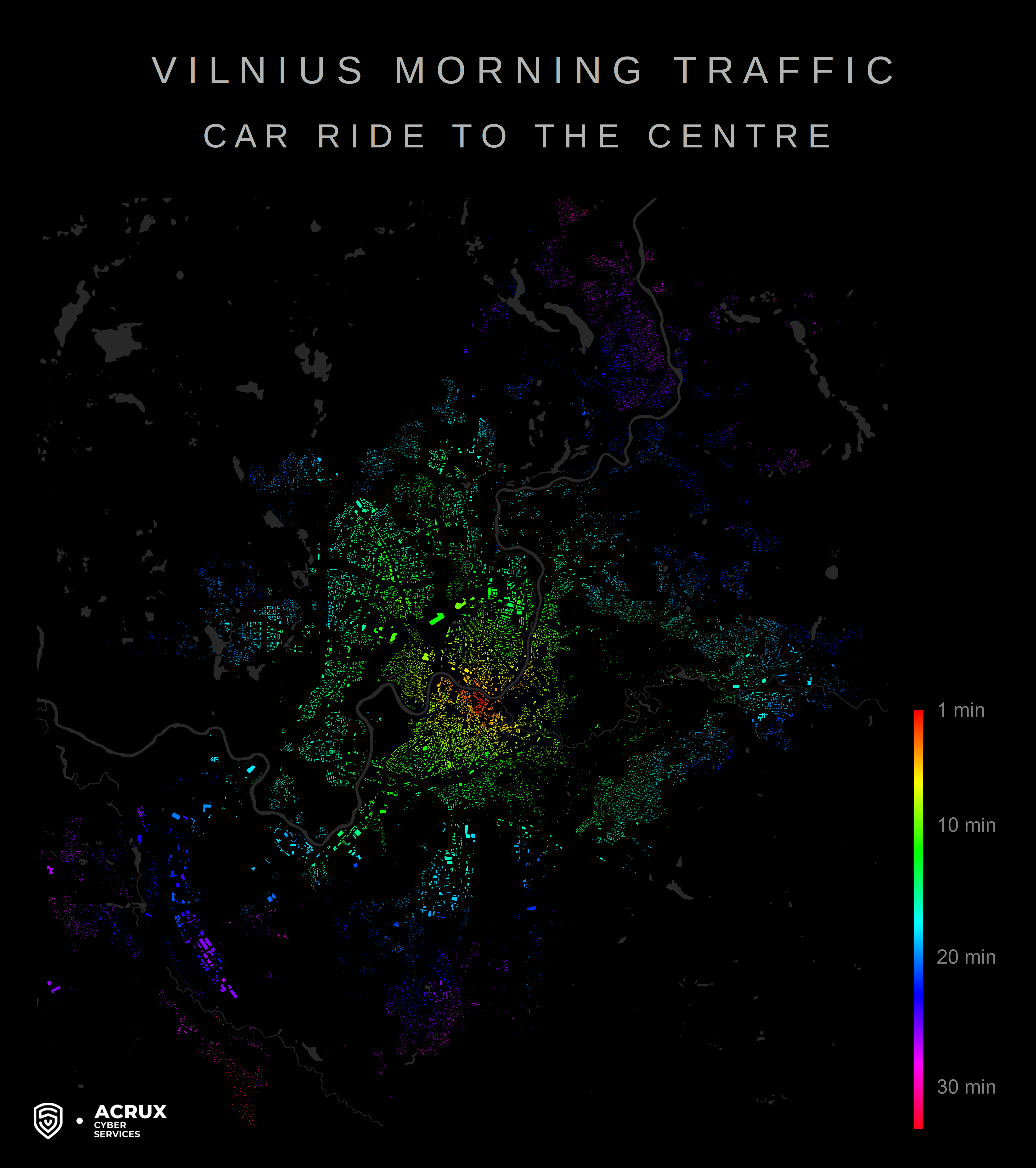 The longest time by car to get to the center is from the north-eastern and south-western outskirts of the city. The road will take about half an hour - the calculation was made to arrive at the center by 9 am on a weekday. This is logical, since the city is somewhat stretched in this direction.

It is interesting that from the eastern outskirts of thepark Pavilnys (New Vilnius), which is also located far from the center, it is not difficult to get to the center. The road will take 15-20 minutes.

In general, the fact that from anywhere in the city, you can get to the center in 30 minutes, even during rush hour, is a very good indicator. For example, for many European capitals this time is many times longer.

On the map above, some neighboring houses are assigned different colors - it's a matter of routes. It is not always possible to immediately get on the highway, it is clear that in the northeast and southwest you need to wind through narrow roads for a long time.

Thousands of routes will overload the visualization, so for clarity, we have mapped and connected only the key points for each route: 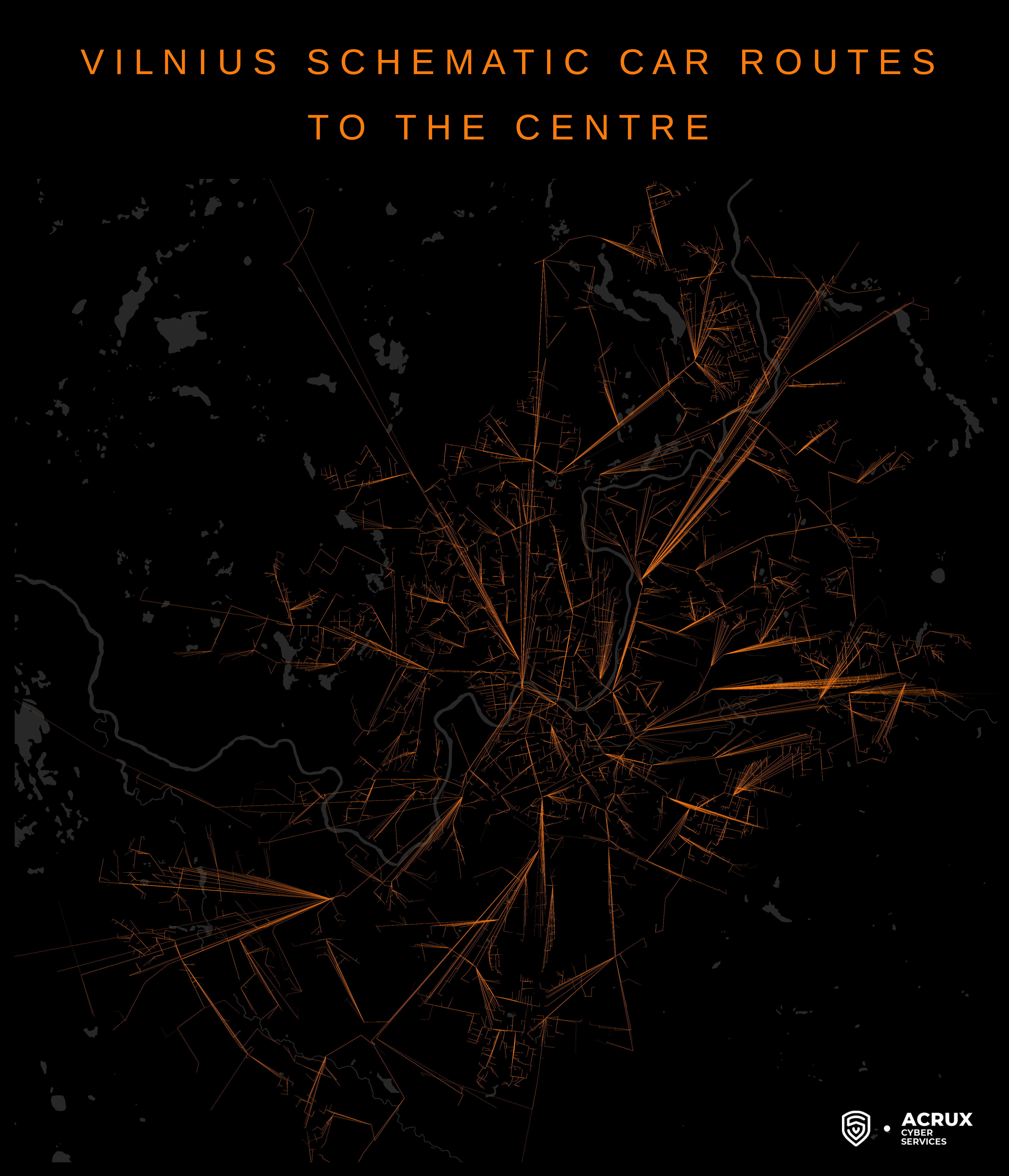 The situation with public transport is much worse. 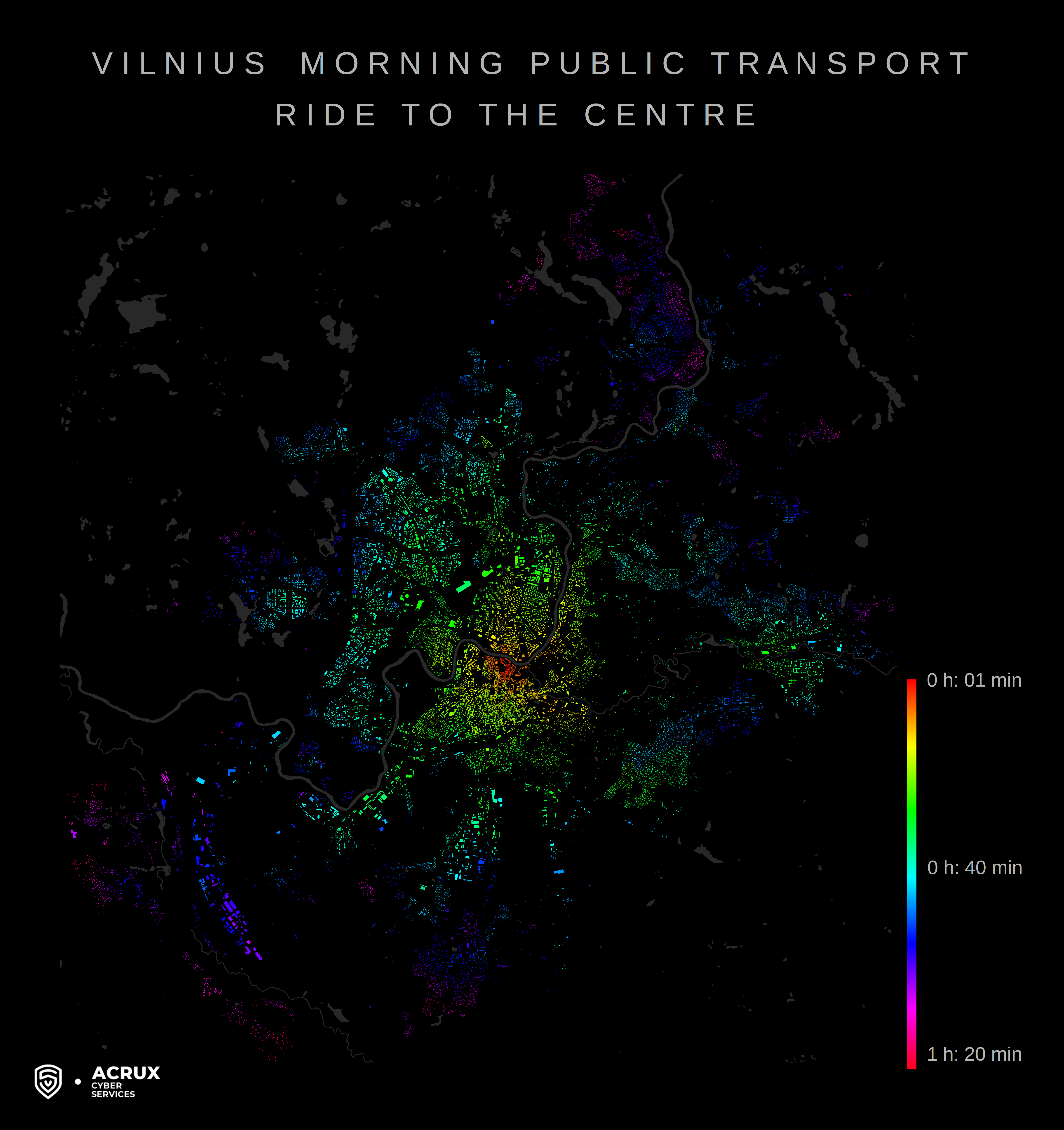 The trip even from remote areas will take 30-50 minutes. And from the outskirts it will take up to 1.5 hours.

And this is comparable to large metropolitan areas. Therefore, the global trend of switching to public transport to reduce COemissions2 will not be easy in Vilnius without reforming public transport.

Below is a map comparing the road to the center by public transport and by car. 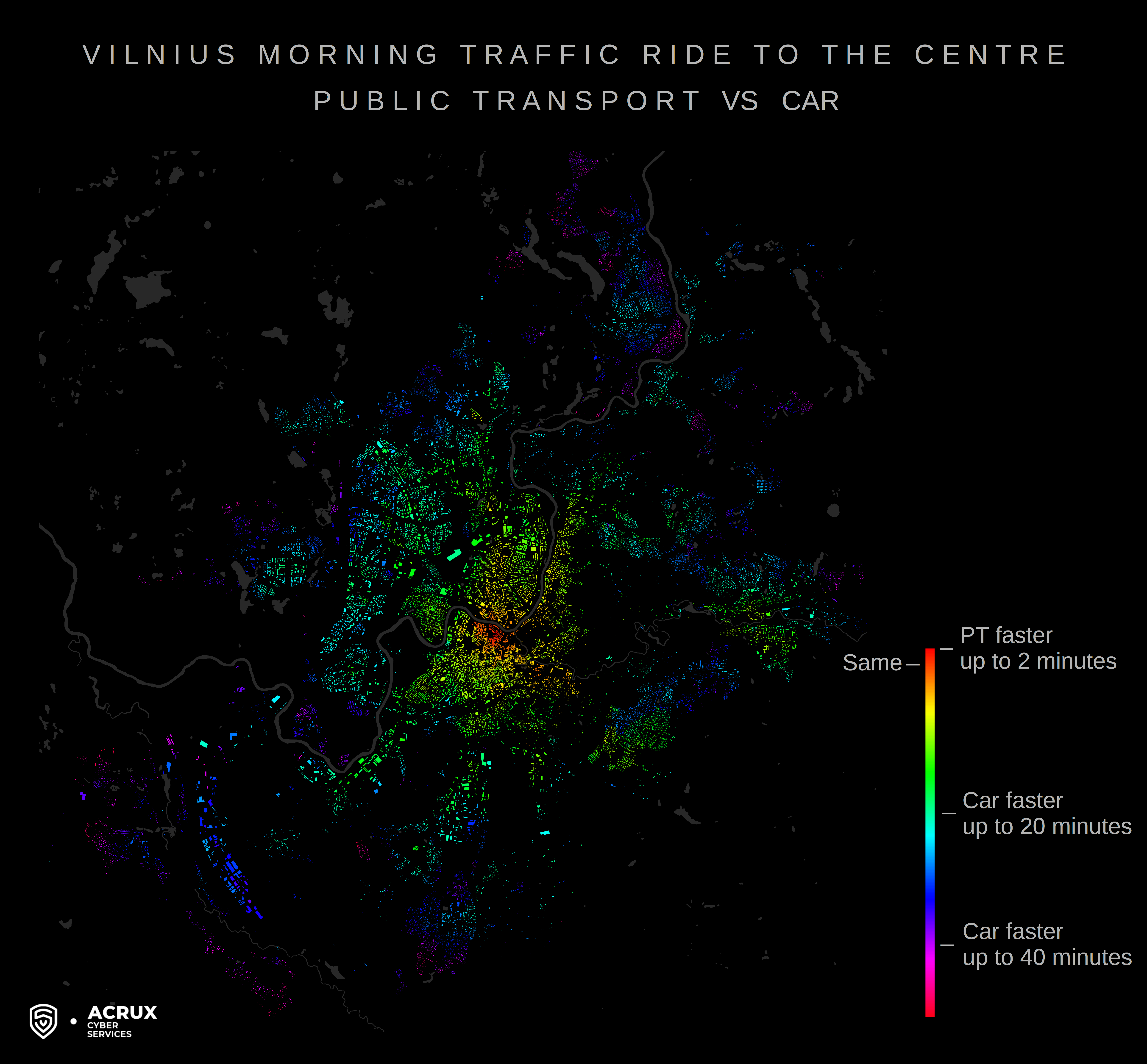 Public transport looks good and takes only 10-20 minutes to play in most of the city. But the outskirts require attention - the difference reaches 50 minutes.

Motorists have the greatest advantage in the northern districts of the city. And only residents of the central part of the city lose not much time on the trolleybus or bus.

What is the reason for this situation?

One of themain reasons is that it is oftenfrom the outskirts a long walkto the nearest public transport stop - these lines are marked in white on the diagram.

The second reason is the need for transplants. There are practically no routes from the outskirts that would allow you to get directly to the city center. And this is always waiting and wasting extra minutes.

And of course, there are no metro, electric trains and trams with dedicated lanes. In most large cities, these types of transport allow you to get from the outskirts to the center quickly enough without traffic jams and traffic lights.

In our work, an analysis of logistics from the outskirts to the city center was carried out by public and private transport, which will be useful both for city officials for planning urban infrastructure and for construction companies, for choosing places for building new areas, and for city residents choosing where to buy an apartment ...

For example, if you work in the city center and do not have a personal car, then it is better to pay attention to the east or west of the city. But in any case, you need to be prepared for long walks to the stop.

It is most convenient to get there by car from the east and northwestern part of the city.

Unfortunately, the northeast and southwest are the least suitable for travel to the city center.

Please note that these algorithms are universal and can also be used to plan routes for emergency services or courier companies.