Natural language processing by means of artificial intelligence is nothing new.  Siri helps us with our schedule and Alexa answers our questions about different stuff.  But NLP possibilities are not limited to simply answering questions.

An ultra-large neural network GPT-3 by Open AI, has been recently released for public use and shows amazing results in solving logical problems and giving answers to general questions. A larger and even smarter neural network and text generation and understanding has been released by DeepMind.

As for practical application we found the survey by teams from Harvard University, McGill University and the University of Melbourne especially interesting to study

Scientists faced the problem of a quick way to assess creativity. And it turned out that the ability to name 7 words the most different from each other in meaning is quite enough to measure creativity!

During the study, the participants were to name 10 words which differed in meaning, 7 of which were measured (since many had errors in 1-3 words) in pairs using NLP methods.

We will not dwell much on the mathematics of measurement, however to illustrate it will give an example, the “leg-hand” pair received 37 points, the “tree-bee” pair - 59 points, and the “mechanical engineering-hippopotamus” - 102 points.

The participants could only use common nouns on various topics (that is, proper nouns, neologisms, for example, medical terms could not be entered). It was also not allowed to google words and peep anywhere. There were only 4 minutes to complete the task, but most participants coped in less than 2 minutes.

After that the participants took the standard challenging tests for creativity, and it turned out there was a very strong correlation between the results of the creativity test and the score the subjects got when they had to enter their own words.

The experiment involved nearly 9,000 people from 98 countries, aged 6 to 70 years. Below you can see the average result: 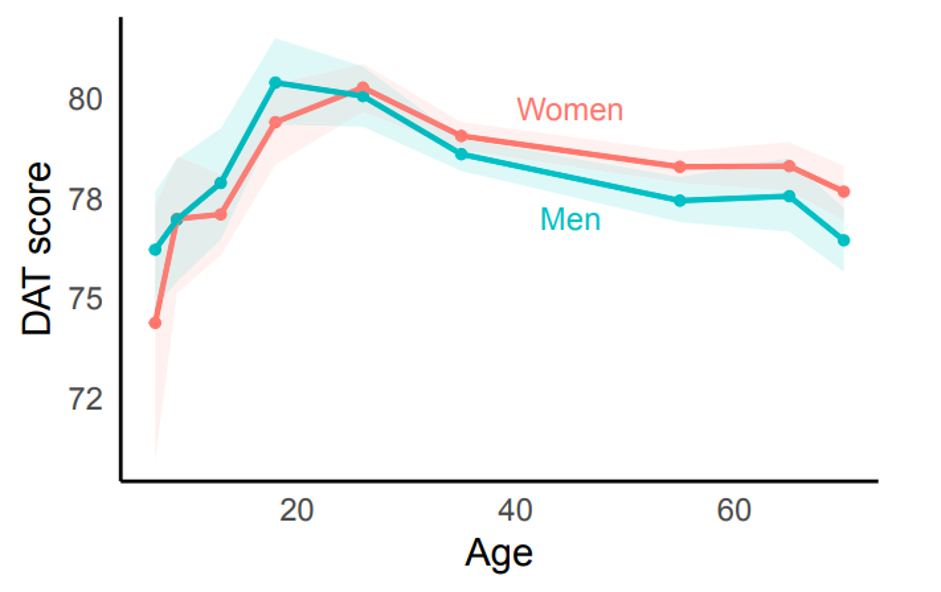 The peak of creativity falls at 18-20 years for men and 25-27 years for women. It should be noted that men show more creativity at a young age, whereas women are more creative at age of 25.

We decided that it would be great if everyone could take this test and compare their creativity with 9000 other people. So we have mimicked the mechanics of the experiment with some improvements!

Firstly, we have created a beautiful and convenient web interface for the test and added a preliminary spelling check in order to avoid spelling mistakes.

Finally at the end you will be able to find out your result as well as compare it to the results of the others to see how many people you excel in creativity.